An inspiring interview last week made us realize we needed to update the Before & After section of our website. We spent the weekend digging back through past projects, trying to find photo matches–easier said than done, since we usually have no idea what we’re going to do with the space as we’re taking the before photos. Head on over here and check em all out.

And stay tuned for another new project dropping in the next couple weeks.

I’m just going to let this beautiful new branding speak for itself. Huge thanks to Jenny and Martin of Studio Bueno. We were nightmare clients and didn’t need to be. They figured out what was vaguely floating around in our heads and made it look beyond perfect.

As I sit here writing this, not even two full weeks have gone by since the article appeared in print. It feels like months have passed. Even as they were sending up photographers on different days and Penelope Green herself to our late-summer job in Canaan, NY, I never would have believed that The New York Times would give us a section cover, a full spread inside, and even a tiny little photo of our faces on the front front page. Not until we had a copy in our hands. What a feeling!

It took a few months longer than we were hoping, but our Philly Airbnb apartment is now live!

We fell in love with the high ceilings, the old floors and moldings, and the private roof deck instantly. The rest looked like a fancy grandmother’s pied-à-terre. We thought it would take a few weeks–a month, tops–to whip the place into shape and get it up on Airbnb with plenty of time to spare before the summer travel season and DNC kicked off. Instead, the listing went live on July 25th, the first day of the DNC.

What took so long? To start, we had almost no time to be in Philly. But we also ended up tearing out a couple closets, panelling that back wall, spiffing up the roof deck with huge planters and plenty of plants, and having a new wall AC installed. We also refinished the original wood floors and uncovered original hex tile in the bathroom, which all needed to be grinded down to remove a thick layer of who-knows-what that had accumulated over the past century. Once we’d done all that, it seemed a shame not to go all the way and give it our usual treatment of leaving no surface untouched. Five months later, we’re done!

Finally some nice photos of the London kitchen and living room we redid in a few whirlwind weeks last summer! Enjoy and check out the full post on A Cup of Jo.

Despite what the article says, we made 100% of the design decisions and carried out 100% of the work with our own four hands. (The client was in Venice during the entire project.) We plastered the pink and grey walls; we built the kitchen shelves, a new kitchen table, a new kitchen island, and a console table in the living room; we sourced all the vintage pieces from different flea markets and second-hand shops in London and along the southern coast; we even replaced the mantlepiece and opened up the doorway between the kitchen and living room. You can see how everything looked for years and years before we worked our magic, right here on our blog. But be warned! It’s not pretty.

The year’s first Brimfield show is quickly approaching (May 10-15), so we thought we’d get all you first timers ready for this lovely but overwhelming experience.

The show’s official website is a veritable wealth of well-organized knowledge and cutting-edge design. Kidding! It looks like they made it on Geocities. Still worth checking out for all the show opening times though, and for helpful advice. I especially like numbers 3, 7, and 8: “Watch what you wear – don’t overdress.  The trick is to look pretty much like everyone else”; “If you’re a casual or a serious collector, get a tee-shirt made up that says: ‘I COLLECT (whatever)’. You’ll be amazed at the people who come up to you“; and of course “Go when it’s raining.”

DO NOT do those things. Should go without saying. You will, however, see people doing precisely those things.

DO show up early and be ready for sun, rain, and lots of walking. Drink lots of water; Brimfield is an endurance event. Bring cash; some dealers take credit cards, but cash is king; the only ATMs at Brimfield have a $200 limit per transaction with an excessive fee tacked on. Haggle, but don’t lowball. Be respectful; the dealers are just trying to make a living, and they definitely aren’t getting rich either way. Try to spot some celebs. Tara met Diane Keaton five years ago!

You’ll find better deals at the end of the week, since nobody wants to pack up the same things they hauled all the way out there a week earlier. But you’ll also miss out on tons of great stuff that the earlybirds snatched up before anyone else even saw it.

Brimfield is actually twenty-some separate flea market fields all clustered together. Some are open for just one day, others for the whole week, and the rest fall somewhere in between. These are the openings that we try to hit every year:

The Meadows: Not actually an opening but always our first stop. Open all week, no admission charge. Lots of big tents toward the back with European vendors whose beautiful finds are usually refreshingly unfamiliar. In other words, the best stuff! Pricier than you’d hope for at a flea market, but way less than you’d pay for Danish modern in a nice shop. And less than you’d pay for new crap! END_OF_DOCUMENT_TOKEN_TO_BE_REPLACED

This is probably old news, but Smeg has finally released two new refrigerator sizes for the US market: a mini fridge and a standard size with legit freezer.

Huge news for us! Believe it or not, this is not a sponsored post. We’ve loved their fridges for years. We put one in the Old Chatham NY house we redid last fall–photos coming soon! We also put a big Smeg range in the North Fork house we redid at the beginning of 2015.

Smegs have always been easy on the eyes. In fact, they look just about perfect in an old upstate-NY farmhouse. But the limited size and functionality of that five-foot-tall cutie wasn’t for everyone. Enter these two great new sizes!

We’re even thinking about putting a cream Smeg mini under the counter in the tiny kitchen of the Philly apartment we just bought. More on that soon…

Tara’s brother and sister-in-law are looking for a place in North Jersey and stumbled upon this gem. They don’t want to jump into a project though, and we don’t have the funds–not to mention the need for a place in Morristown. So here’s hoping that someone else sees it and loves it enough to buy it. It’s a sure fire way to get us to work for you!

If it looks that good empty in winter, I can’t imagine how good it’d look at its best. 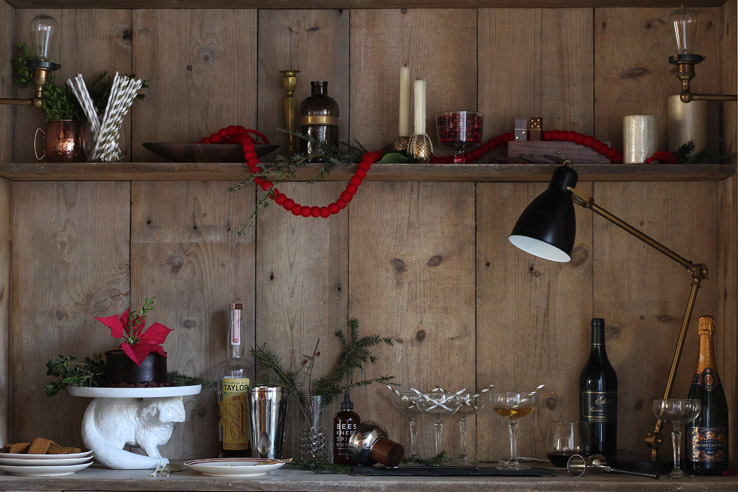 Tara created another beautiful Christmas vignette for West Elm this past week, and they featured it on their blog a couple days ago. Check out the full post here!

If you’re reading this, you clearly own a computer or a smart phone. So you’ve probably already seen these beautiful photos of North Korean interiors that look like Wes Anderson could have designed them (and that look like perfect computer renderings). But just in case you missed them, check them all out!

And while you’re at it, check out this cafe that Wes Anderson actually did design earlier this year: